Kelly Kenney was born in 1975 and raised in a small town in southwest Missouri with hard working, loving parents and two older brothers. Kenney credits his parents for allowing his dreams of becoming a cowboy to come true. He says, “Just now I realize how many sacrifices my family made to haul me to all of those high school rodeos. (We were) Living off of very little, but I never knew it, I felt I was the richest kid in the world.”

At an early age he learned to ride a stubborn little sorrel pony, and it wasn’t long before that experience developed into a love of rodeo. In high school, he learned how to rope and bulldog, and how to play guitar. He went to college on a rodeo scholarship. Soon officiating high school and college baseball and basketball, rodeoing, picking and singing consumed his life, leaving him with very little time for anything else. Then accidentally, in 1996. at a rodeo in his home town, the announcer didn’t show. Kenney reluctantly agreed to help. That night in November of ’96, he was “bitten by the entertainment bug,” as he puts it.

The next four years of Kenney’s life were jammed packed with excitement. He was announcing rodeos and competing hard all summer, officiating college baseball in the springtime, calling basketball games all winter and filling any otherwise vacant time slots with singing gigs. It didn’t take long for Kelly Kenney to realize his life was being consumed with work and travel, leaving little time for the things he loved at home - his family, hunting, fishing, and ranching.

In 2000 he became the head rodeo coaching position at Missouri Valley College in Marshall, MO. The next year Kenney was encouraged by his peers, students and family to pursue a career in the field that he had originally started years earlier, announcing rodeos. Kenney turned pro in 2001, resigned from the college in good standing, hung up his officiating uniforms and has never looked back.

Now Kenney announces PRCA Rodeos full time working approximately 30-40 events each year, traveling from Georgia to California and Texas to Montana. Last year he announced three Wisconsin rodeos, Spooner, Madison and Merrill. Despite his busy schedule all around the United States, last year, for example Kenney was able to fit in a fishing vacation in May and a hunting trip in November.

With a cow/calf operation at home, Kenney’s life remains full of responsibilities. Kenney says, “Now when rodeo season slows down in the fall, I get a chance to go hunting, pick with the band and auctioneer some sales. Most importantly, I get to truly enjoy my family.”

To find out more about Kelly Kenney, visit his website: http://www.kellykenney.com/index.html 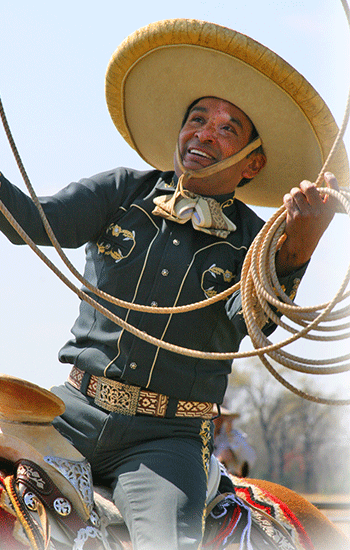 As the 2007 PRCA Specialty Act of the Year, Tomas Garcilazo's proficiency as a skilled horseman and rope artist has once again been acknowledged. Simply one of the finest Charros in the world, this native of Mexico City was introduced at an early age to his family heritage and tradition of "La Charreria" (a skill performed through the generations only by the Mexican Charro). Charros take extreme pride in their highly developed horsemanship and roping abilities and Tomas is certainly no exception. As a third generation Charro, Tomas has devoted his life to sharing Mexico's National Sport La Charreria with the world.

A lifetime of preparation, performances and competition continue to require total self-discipline, patience and commitment by Tomas to training and mastering the artistry of La Charreria. Incorporating a display of refined horsemanship while demonstrating maguey rope artistry in his performances he brings audiences to their feet applauding in appreciation of his skills. Tomas devotes countless hours to his horses who with their athletic ability and intelligence willingly execute maneuvers when asked by their friend. It is a rare and honorable experience to witness these partnership performances.

Tomas has performed throughout Europe, Canada, the U.S. and Mexico. He has appeared on Broadway and toured the U.S. with the Will Rogers Follies, an acclaimed 6 Tony Award winning shows. He was a featured performer for two years at Disney's Wild West Show in Paris, France plus the Buffalo Bill Wild West Show touring Holland and Germany. Tomas has performed numerous times for Mexico's Presidents along with guest performances at the U.S. White House and New York's Kennedy Center. 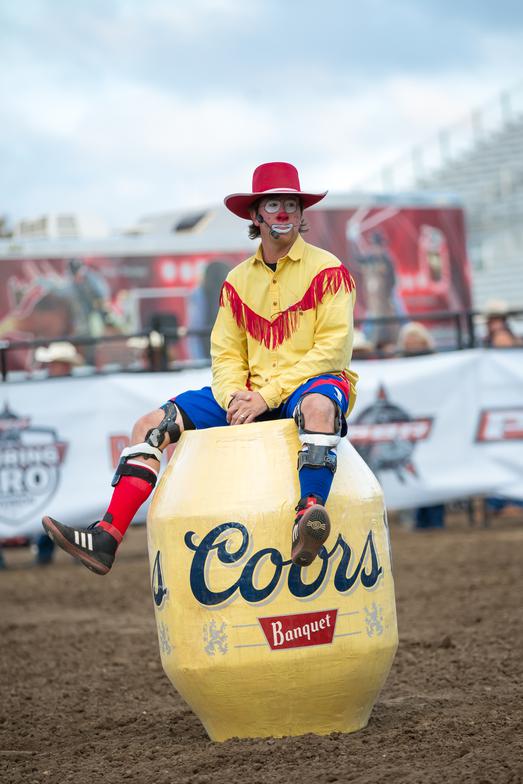 John Harrison is a noted rodeo clown and barrelman. He comes by his profession honestly. His late grandfather was rodeo legend, Freckles Brown. (Freckles rode the "unrideable" bull Tornado, the subject of Western Music songs, and was a World Champion Bull Rider)  John was around rodeo and rodeo people his whole life. John became a member of the Professional Rodeo Cowboys Association (PRCA) in 1999, as a trick and roman rider, and trick roper. He later diversified and added barrelman to his PRCA card.
John has worked rodeos from coast to coast and has made 7 appearances at the prestigious Wrangler National Finals Rodeo in Las Vegas, NV, three times as a specialty act performer and four times as a barrelman.  2012, 2014, 2015 John picked up the coveted award of Comedy Act of the Year.  He brought home the gold buckle that represents his achievement as Coors Man in the Can 3 times . He feels blessed to be doing what he loves and with those he loves at his side.
John married in 2006. He and his wife Carla have had four children; daughters Addison & Billie (now an angel in heaven), Charlee, and son, Cazwell. You won't often catch John with out his family. Rodeos seem more fun with them at his side. 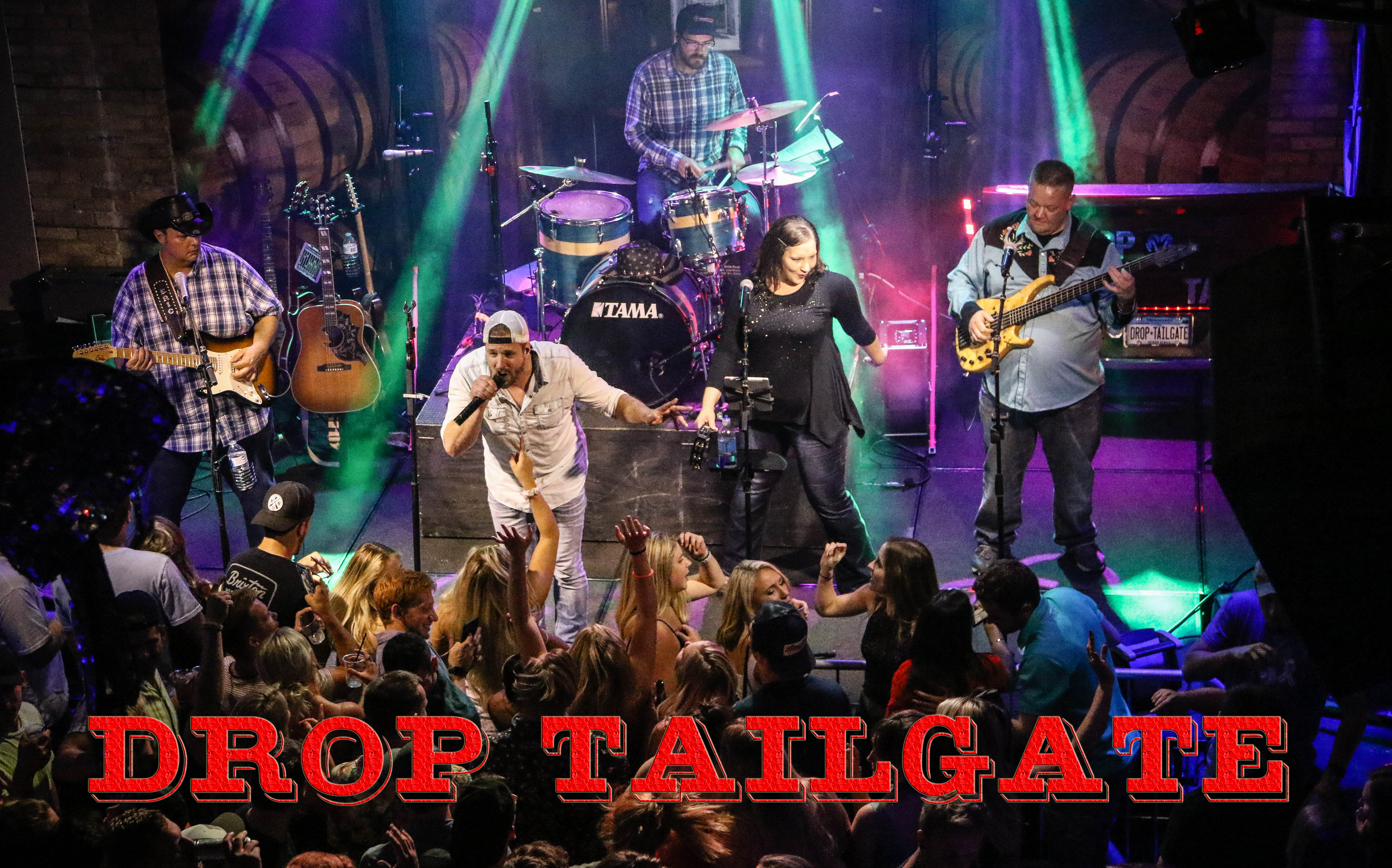 Drop Tailgate performs the best high energy country, rock and pop music that will have you dancing and singing along to your favorite hits from the beginning to the last encore of their show!  Drop Tailgate performs songs strikingly close to the original artists but give it a little boost to keep the party rockin'!  Along with performing at countless Fair and Town Festivals and street dances,  Drop Tailgate has shared the stage with dozens of national acts at many major music festivals to include Moondance Jammin Country Fest, Winstock and Country Fest to name a few!  If you want a fun band with an awesome song list of hits, you come to the right place! Drop Tailgate’s show will give you a night to remember!  You will have a blast at their show!!

Check them out at: https://www.droptailgateband.com/